As several of you are probably members of the TaPiR plagiarism-reporting fanfiction.net forum, cases are often reported here and on TaPiR either simultaneously, or usually within close temporal proximity.

Given this, there is inevitably some duplication of effort that results, so to alleviate this, all users reporting cases of plagiarism simultaneously to this comm and to TaPiR are asked to follow this rule:


If you have reported your case on TaPiR in addition to this comm, please place the subject header of your forum post and provide a link to that posting as the first two lines of your report, in the following format, as in the example:

Report - FFNID 1234567 - Ms Plagiarizer - (list of fandoms) [ This should be a direct copy-paste of the subject header of your TaPiR forum post, as the format is rigidly specified ]

http://www.fanfiction.net/topic/(rest of URL which contains a series of numeric references comprehensible to ff.n only) [ Paste the URL to that forum thread* ]

After these two lines, you may continue with the rest of your report.

Additionally, if you do not report the case to TaPiR initially, but do so later, please edit your post to incorporate the first two lines.

This is a crosspost from TAPIR. This individual is a chronic plagiarist, who has created three accounts (she had four but the admins of FFN deleted one last year) in order to perpetrate her thefts.

I have not gone back through snowy's current accounts to see if she has perpetrated any more plagiarism since the sixth of January, so anyone who wishes to do so is certainly welcome to, and such effort would be much appreciated.

I was contacted via PM on FF.net last night regarding a completed Breakfast Club fic located on Wattpad that is a direct copy of mine. I did register with Wattpad, but I am unable to see dates as to when this person updated the story versus my story. I don't know how to access comments or anything on Wattpad, but I see there is one comment to the story. My story was completed in May 2014.

My story can be found at my website: http://www.phantomroses.com/apckrfan/fanfic/TBCfic/motherwarnedindex.html

A link to my first update informing my LJ journal of the fic: http://apckrfan.livejournal.com/77654.html from April 2014

The One Your Mother Warned You About

What if unknowingly John got his wish of impregnating the prom queen that March day?
61 reads 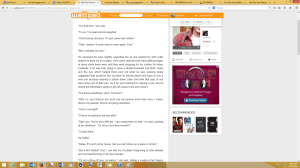 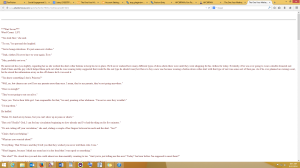 I have not contacted the person as I can't seem to find a way to do it privately via Wattpad, again this is a website I'm not familiar with. If you require additional information, let me know that, too, this is the first time I've encountered this in over 14 years of writing fan fiction.

Thank you for looking into this for me.
Susan/apckrfan

for direct word for word plagiarism of the following:
( Collapse )

Today I came across a case of plagiarism on fanfiction.net. An author calling themselves MutantNinjaMikey posted a story called Red Riding Hood on July 8, 2013. It as an almost exact word-for-word copy of Shadowglove's story The Thing With Dreams, which was published on September 24, 2007. I notified Shadowglove and no she is not MutantNinjaMikey.

I also have screenshots of the PM exchange between myself and shadowglove if needed. Shadowglove has notified the admins at fanfiction.net and I left a review on MutantNinjaMikey's plagiarized work informing her that I knew she had plagiarized it and had notified the original author.

Apologies for the slow response time. We have been busy over at TAPIR. Fortunately have made some headway with admin reports. Some old cases previously reported on stop_plagiarism, plus some new ones, have now received actual response and action.

The case against allmystory is one of them.

Thanks to efforts of volunteers who provided translations and submitted reports via email and blog comment, accounts of allmystory and duplicate WirelessSK were banned from FFN.

What do I mean by "plot plagiarism"? Specifically, it's the lifting of the entire main plot from someone else's fanfic, even going so far as to use specific terminology from that fic, and merely changing aspects to be able to re-post it as an original fanfic without being accused of direct plagiarism. The author, songbird1313, is clever and has made sure she hasn't actually stolen whole lines or paragraphs from "Mine". Instead, she has rewritted the fic in her own voice, but the entire plot has clearly been lifted from Curiositykils' plot. In other words, it isn't an original transformative piece in its own right - it's a bad re-edit of someone else's fanfic.

Also, if you visit Songbird1313's Fanfiction.net profile page and scroll down to her works, you can see that she is in the Dramione fandom (she's posted four other Dramione stories to date). If you click the FAVORITE STORIES tab, she's even listed, "Mine" as one of her favourite fanfics (among a slew of other Dramione stories). Clearly, the fact that her story bears a remarkable resemblance to "Mine" is not coincidence. In fact, songbird1313 is quite forthcoming in actually admitting that her story is "inspired by" Curiositykils' "Mine" (see her author's note at beginning of chapter 3 - screenshot below). Yet, despite the fact she knows she's stolen Curiositykils' entire plot, she states that she intends to continue the story.

Please know that Curiositykils has PM'd me personally, disturbed by this entire situation, and knows I am active in keeping tabs of plagiarists in our fandom. She asked me for advice as to how to report what songbird1313 has done as plagiarism. She was clearly not comfortable with what songbird1313 has done to her copyright (original transformative works, as you know, have their own implied copyright). Please contact her directly if you need any of these facts verified.

Here are the plot elements that songbird1313 lifted directly from Curiositykils' fanfic, "MINE":

- Hermione Granger is a Healer who is called in by the Ministry to investigate an odd case that the Aurors have stumbled upon: various Death Eaters were captured and experimented on post-war by unknowns, splicing their DNA with monsters (werewolves, vampires, veela, dragons, etc.)
- Draco Malfoy was among those captured and freed by Aurors. He's been spliced with a Veela.
- Hermione Granger is Draco's Veela mate.
- When Draco wakes up as a Veela, his human personality is completely sublimated, and instead the Veela has its own personality that takes him over and claims Hermione as his mate, saying, "MINE!"
- VeelaDraco speaks of himself in the third person (by chapter 3, after getting caught plagiarizing, songbird1313 gave the Veela the name "Kai", as if changing that element makes the story different somehow). He refers to Hermione as "Mate" only. He pitches a fit when Hermione shows rejection of him, and blames himself for that failure.
- The character of Padma Patil in "Mine" has been replaced by Pansy Parkinson in "His", and the character James in "Mine" has been replaced by Marcus Flint in "His".
- Even the title of songbird1313's story ("HIS") is ripped from CuriosityKils' summary: "Draco is a Veela. Hermione isn't his Healer. She's just his."


I hope this matter can be resolved to all parties' satisfaction. Thank you for your time and help in this matter.

( Collapse )
I'm reporting the plagiarism of the book The Invasion by K. A. Applegate by Aislin Marie at http://aislynmarie.wordpress.com

Aislin Marie has been posting Animorphs books with very minor changes to the text.

This was originally posted to TAPIR as an abuse report. The first author, Aryadhanie, was new to ff.net and didn't know she had to email her report. I realized what was going on and stepped in.

I really hope someone can step in and help the other authors. I think they're aware, probably from the reviews others have posted, but I don't speak Indonesian. As the admins at ff.net require reports to be written in English, they may be at a big disadvantage.

I'd like to ask people to please start using Imgur or Picturepush for image hosting because Photobucket and Tinypic have serious issues with Javascript blockers and even when using a browser that allows it, they don't always show the images. As a mod it's frustrating when trying to access the images people have linked of their screenshots.
Collapse